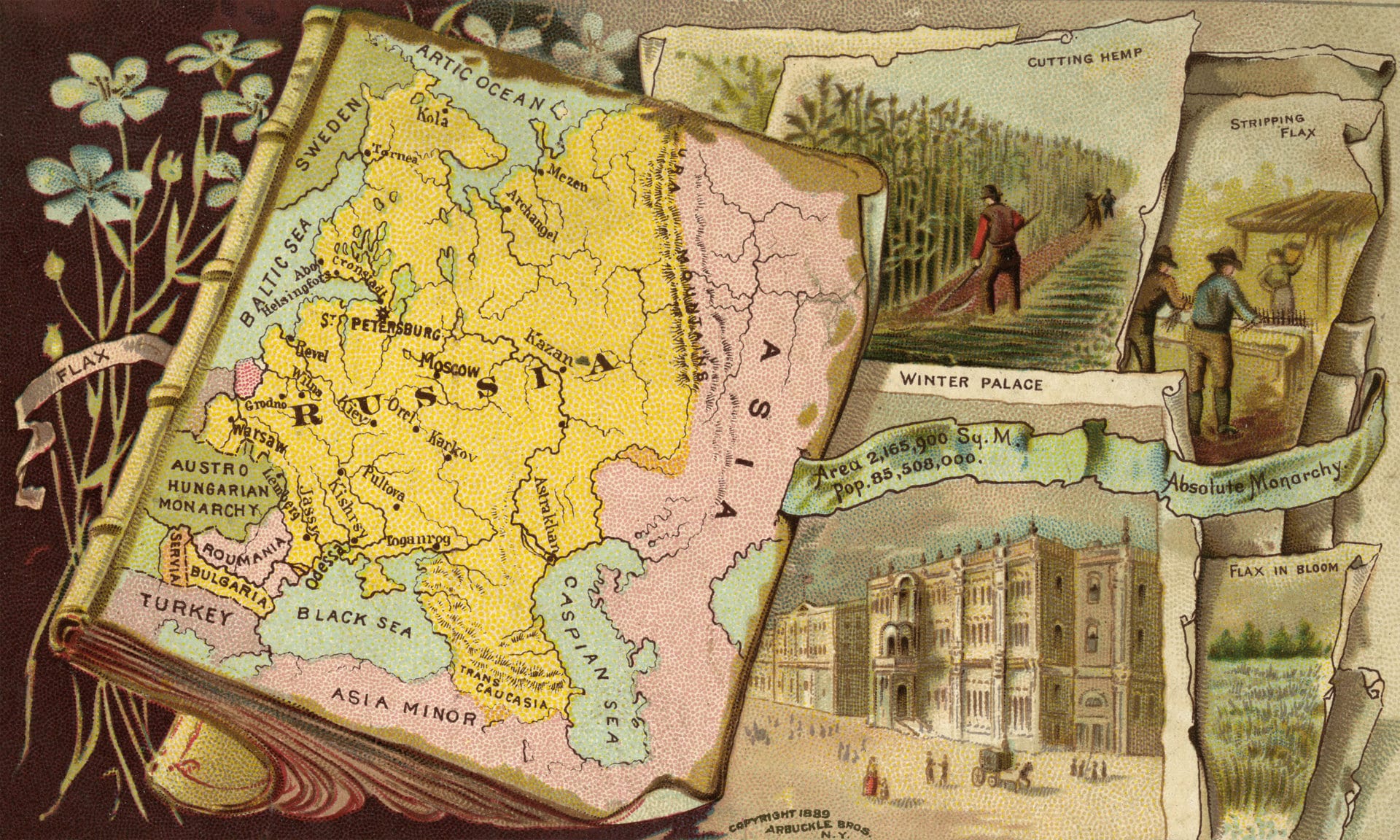 The largest hemp producer in the world

This card from 1889 by the New York roasting company Arbuckle’s Coffee is part of a series of fifty cards which show unique qualities of various countries in the world. This collection of cards from the Russian Empire does not only show the Winter Palace of the Tsar in Saint Petersburg (The Hermitage) but also the cultivation of hemp and flax.

Since the eighteenth century, Russia was the largest hemp producer in the world. Around 1740, the country produced at least eighty percent of the hemp that was used in Europe for sails, rope, nets etc. High quality hemp was the number one export article of the country, it was more important than fur, wood or iron. In the second half of the eighteenth century, Great Britain imported ninety percent of its hemp from Russia. British shipping was almost completely dependent on Russian hemp. This was enough reason for Napoleon to start a hemp war

Napoleon and Tsar Alexander I signed the Peace Treaty of Tilsit in 1807. One of the conditions was that Russia would no longer trade with Great Britain; Napoleon’s arch enemy. The French Emperor hoped that a shortage of Russian hemp would weaken the British fleet (and economy). In 1811, Russia resumed trade with Great Britain. Napoleon protested but did not get a reaction from the Tsar. Consequently, Napoleon put an army of 680.000 men together and on 24 June 1812 began his march on Moscow to, among other things, gain his control over the Russian hemp production. The campaign was a complete disaster and meant the beginning of the end for Napoleon.

After the Russian Revolution

The country was still the world’s greatest producer of hemp after the Russian Revolution of 1917. The most important production areas were situated in the current Ukraine and White Russia. In 1931, a special institution was established in Glukhov (Ukraine) for the development of new hemp crops. In the nineteen seventies they successfully developed a better fibre quality, a higher yield per hectare and a lower THC-level.

After the fall of the Soviet Union, the hemp cultivation decreased significantly. One of the last Russian hemp factories is in Bolkhov. Once, there were sixteen. However, according to a rough estimation, there are circa 2.5 million hectares of wild hemp growing in the far east of Russia and around the Black Sea.