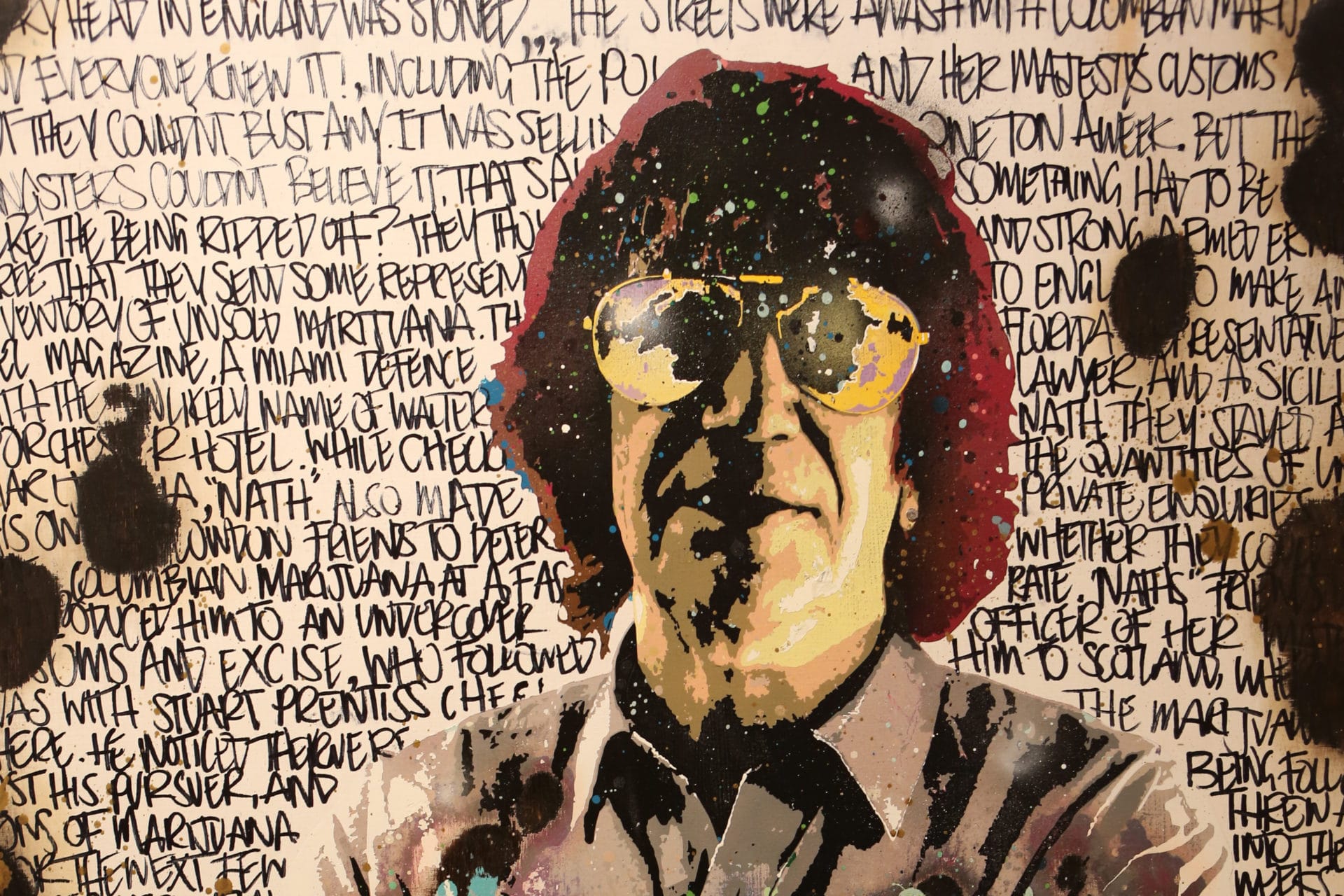 The late Mr Nice was Europe’s most successful cannabis smuggler.

A portrait by Goldie

In 2010 the RedHouse Originals Gallery in Harrogate, in the north of England, asked various artists, including Goldie, Terry Cryer and Nick Reynolds, to produce a portrait of the legendary drug smuggler Howard Marks, better known as Mr. Nice. This led to the Mr. Nice Project, an exclusive series of portraits on show to the public in October of that year. On the occasion of the 2014 Cannabis Culture Awards, which were organised in the Hash Marihuana & Hemp Museum in Amsterdam, and as a special surprise honouring Howard Marks, one of the prize winners, the painting was bought by the museum.

But who is Mr. Nice exactly? For many, Howard Marks is Europe’s most successful cannabis smuggler. In the mid-1980s Marks had as many as 43 alter egos, 89 telephone lines and 25 companies in Europe, North America, Asia and Australia. He had contacts with organisations including MI6 in the UK, the CIA in the USA, and the Mafia. At the height of his career, his network managed to smuggle 30 tonnes of hash per shipment and all without using any violence. Following an international manhunt by the Drug Enforcement Administration (DEA) he was arrested and given a 25-year prison sentence. In 1995, he was conditionally released for good behaviour having spent 7 years in jail. His autobiography “Mr. Nice” (1996) became an instant bestseller and was made into a film in 2010, starring Rhys Ifans and Chloë Sevigny in the leading roles. Howard Marks was a fervent activist for the legalisation of cannabis up until his death in 2016.

Clifford Price (Bristol, 1965), better known as Goldie, claims to have created his portrait of Howard Marks within 12 hours and a mere few minutes. The back of the painting was signed by Goldie and Mr. Nice himself. The text on the front of the artwork comes from Howard Marks’ autobiography and he has stuck Rizla cigarette paper packets on the side.

Goldie is best known for his innovations in jungle and drum ‘n’ bass music, but he has also acquired global fame for his work as a graffiti artist. The painting is a fine example of graffiti as an art form. In the early 1970s graffiti art grew increasingly in popularity. It was seen on trains and walls in public areas in New York, the city where it all began. Keith Haring, Lee Quiñones and Lin Felton were key figures in the emerging graffiti scene. Their work shows how graffiti tried to shake up the art world, not only stylistically, but also through political messages.

Goldie’s portrait of Mr. Nice is on display in Amsterdam, together with the original prison ID card of Howard Marks which was already part of the collection of the Hash Marihuana & Hemp Museum.